Natto (not to be confused with nunchaku) is a traditional Japanese food consisting of soybeans fermented using a strain of Bacillus subtilis, a common soil bacterium that is the same species from which Bacitracin was first derived in 1943. The health benefits of eating natto are well-documented. One story about the origin of natto (comparable to a story about the origin of matzah) is that, during the 11th Century, a small group of Samurai were boiling soybeans for their horses when they learned that a large enemy force was approaching. They hastily packed the soybeans into their saddlebags and rode away. When they opened the bags several hours later, the boiled soybeans had fermented, but the Samurai were hungry and ate them. They liked the food, and its popularity spread in ancient Japan.

To make natto, you need nattomoto or starter culture, soybeans, and a means of cooking the soybeans and of keeping the fermenting beans warm. I cook the beans in a pressure cooker because they can be cooked in far less time and will be better sterilized in the process, helping to prevent opportunistic microorganisms from ruining the culture. For keeping the fermenting beans warm (104° F / 40° C), you could possibly rig something or perhaps even use a yogurt maker for a tiny yield, but a lab-quality incubator (see below) is the best option. I tried a yogurt maker years ago, but the results were unreliable, and I gave up for a few years. Then, after buying an incubator in late 2012, I began using it for making natto, and the results were far better.

Smaller soybeans are considered preferable, on the theory that the culture will permeate each bean more quickly. The process is begun by rinsing the dry beans, then soaking them in water for several hours or overnight (bigger beans also probably should soak longer). Hot tap water is effective, and should be used if safe; water will be wasted because the beans should remain completely immersed while soaking and the excess water drained off before being steamed in the pressure cooker.

The time needed to soften the beans can be reduced by bringing the water to a boil briefly and then letting the beans soak as it cools.

After soaking the beans for several hours or overnight so that they absorb water and become soft, then draining off the excess water using a sieve or slotted spoon, I transfer the beans into cylidrical jars that will be placed inside the pressure cooker. Originally I put lids on the jars loosely (not tightened down, to allow steam to flow), but later I began omitting the lids entirely, with no excess water or other undesirable results. (It's also because the lids rust in the steam and have to be replaced.) On starting the cooking, the pressure cooker is only partially filled with water: enough that it will not boil away and/or burn the pot while the beans steam within the jars, but not at a level high enough so that water might percolate in. Once the cooker is up to full pressure, the beans need only about 10-15 minutes. I then turn off the heat and allow the whole apparatus to cool while still closed. Be sure that the pressure cooker (you should use a good one) is properly closed to prevent injuries.

After steaming (for about 10-15 minutes after pressure is reached), I allow the soybeans to cool to about 104° F / 40° C (or hotter, which may actually boost the initial growth). The cool-down from steaming temperature should occur within the pressure cooker, without opening it, so that the beans remain sterilized until they are transferred into shallow trays and inoculated with the starter culture. Using a clean spoon, I transfer the steamed, partially cooled beans (but not any water that has collected at the bottom of the jars) into shallow plastic trays, spread the beans out evenly, and then sprinkle starter culture here and there. (Although a tiny plastic measuring spoon comes with the packages of starter culture I use, I find that the extra step of measurement is pretty much unnecessary and perhaps also increases the risk of contamination. It is important to reduce the chance of contamination by unwanted organisms. For that reason, I work fairly quickly with clean hands, and avoid doing anything that could introduce contaminants, such as handling other objects or allowing dust or debris to enter the culture.) After sprinkling in the starter culture (nattomoto) and any additional ingredients, I mix the beans thoroughly and level them one last time with the spoon. Finally, the trays are lightly covered (mine have plastic lids that I leave loose) in order to retain humidity (but they must not be airtight because the fermenting culture needs oxygen) and are then placed inside the incubator, which has been set and pre-warmed to 104° F / 40° C.

If any trays develop a nauseating smell and/or do not appear to be fermenting into natto, it is probably because another microorganism has grown on the beans instead of (or in addition to) the Bacillus subtilis. (This, the result of inadequate aeration allowing anaerobic bacteria to grow, happened sometimes in my early days, before I began using a roomy incubator and shallow trays, but not since.) Any contaminated cultures should be disposed of, and the trays thoroughly cleaned or taken out of service. Also, allowing the natto to ferment for too long will cause it to develop an ammonia smell that ruins its taste and quality. Falling asleep with a batch going can be fatal to that batch. Here is a bit of advice that takes us full circle back to the earliest preparatory steps: if the beans are not soaked long enough before steaming, the batch tends inevitably to be of poor quality, even if steaming time is especially generous. They are softened by soaking, which then, I think, allows the steam to penetrate and cook each bean through, creating a penetrable and nutrient-rich medium into which the Bacillus subtilis readily grows.

Fermentation of one of my batches takes about 12 hours, but I often jump-start the process by starting with very warm, even hot, soybeans that are either fresh from the still-warm pressure cooker or (if cooled too long) microwaved in the trays for about 30 seconds prior to inoculating. When the natto is ready to take out of the incubator, it will have a curiously somewhat waterproof quality and the tiny characteristic natto strands between the soybeans. It will also have a pleasant characteristic aroma (different from its later smell after being refrigerated). Before transferring the natto into containers for refrigeration, I wipe away any condensed water that has formed on the inner sides of the trays so as not to wet the natto while transferring it. After cooling, natto has a pleasant, nutty taste, which tends to improve (due to the continuing breakdown of proteins by enzymes) if it is kept refrigerated at just above freezing for a day or so before eating it. Although it is traditionally served on rice, I have come to prefer to eat natto on rice crackers with horse radish mustard and sometimes a small bit of avocado on top. 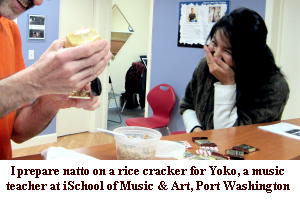 I use a Quincy Lab Model 12-140E, with an internal capacity of two cubic feet, which I purchased from Carolina Biological Supply Company (see this link). The incubator comes with only two shelves, but additional shelves and mounting brackets can be ordered directly from the manufacturer (Quincy Lab Inc.) at 1-800-482-4328 or 773-622-2428. Have your incubator model number and a credit card handy when you call.

The Man Behind the Curtain